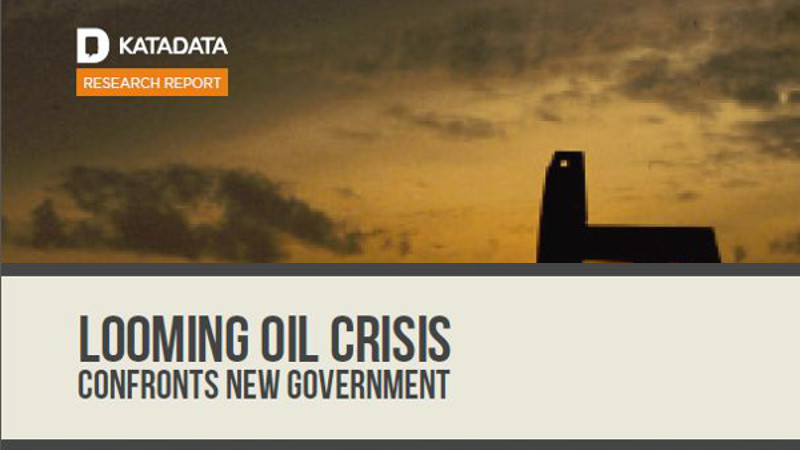 KATADATA/
Fill in the form below to download the file.

KATADATA - The new government that will take office after July?s presidential election, will face a daunting task and a heavy burden. They will have to deal with huge workloads left by President Yudhoyono?s government in the energy sector.

The country?s large and leading oil blocks that until now contribute significantly to its total oil production are getting older and their productivity levels have decreased. Various methods and technologies, including enhanced oil recovery, have been implemented to overcome this issue. However, on average, the output of 10 large oil fields managed by multinational companies have sharply declined.

The problem is that the impact of the widening gap between Indonesia?s oil output and consumption does not end in the surge in oil or fuel import. The gap has serious, subsequent impacts on the state?s economy.

In addition to causing trade balance deficit, the increase in oil and fuel consumption and import is detrimental to the nation?s fiscal health, pushing up oil and gas deficit, as well as imposing a burden on foreign exchange reserves and Rupiah exchange rates.

To illustrate this point, when oil and gas deficit reached its highest level of minus US$1.85 billion in July 2013, the trade balance deficit also reached its highest level ever recorded in Indonesian history of minus US$2.3 billion. The huge demand for foreign exchange to cover oil and gas import has drained the country?s foreign exchange reserves that reached its lowest record of US$92 billion in August 2013. During the same period, Rupiah exchange rates plunged by 7 percent to IDR 10,900 per US dollar on average.

When the new government is in power, Indonesia is not just an influential oil importer. A report from Wood Mackenzie in 2013 revealed that Indonesia is expected to become the world?s largest fuel importer by 2018 and the largest contributor to fuel deficit in Asia Pacific region. In 2019, the gap projection between oil consumption and production will reach 1 million barrels.

Therefore, the new government will have to confront the challenge as well as the threat of an oil crisis. The heavy burden imposed by the surge in oil and fuel imports will pose a serious threat to the country?s trade balance, payment balance, foreign exchange reserves and Rupiah exchange rates.